Learning About Ratios with Hands On (Math 8) 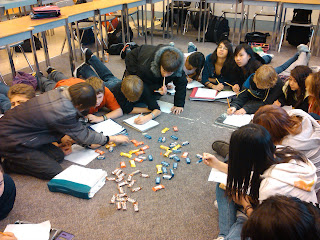 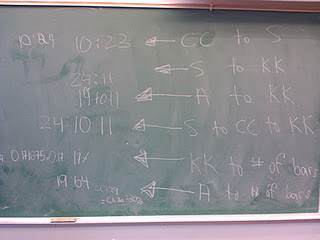 This post is courtesy of middle school teacher Pam Rutten.

This morning I taught my ratios lesson on the floor with my class sitting in a circle each with a piece of paper and a pencil.  We started by discussing what ratios were and using the class, boys to girls, as our starting point.  I wrote a few points on the board as we were discussing and they copied them down.  Once I felt they had the idea, I took a box of Halloween mixed chocolate bars and dumped them on the floor in the middle of the circle.  At that point I put six different scenarios on the board (kit-kat - smarties, coffee crisp- aero, kit-kat to all chocolate bars) and asked them to write the ratios in different forms on their paper.  The were practising part-part ratios, part-whole ratios, and 3-term ratios.  They were also practising converting fractions, decimals and percents.  They were discussing and problem solving individually and as groups. Once they completed it on their paper, I had volunteers write their answers on the board and we would then compare and discuss as a class.   All the students were interested and very involved in the lesson.