I have recently become a “twitterer”… and I am amazed at how that one  small step has opened up a new world to me.  I pick up my ipad when I  am too tired to do anything else, and the next thing I know I am  skimming articles about innovation, assessment for learning,  creativity, inclusion, belonging … or I am seeing pictures of classrooms trying something new, or reading quotes.  It is great professional learning for me, and I am sometimes amazed at how interesting it is just to reflect and think and make connections to all of the work I am involved in.

Through a Different Lens is a project about innovation, creativity, relationships, and reflection on our own practice.  It is about our growth as educators and the growth of our students.  The project itself is school based, but many things happening in the district and in the province are connected so closely with the work that we are doing.

In the next two weeks alone we have some great opportunities for all staff in the district that teachers in TADL might like to take advantage of as they are all part of innovation, creativity, relationships and reflection.

Edcamp Penticton:  our very first edcamp Thursday, Feb. 20, 3:30-6:00 at Pen High, where anyone interested will meet for a few hours and share / facilitate sessions on current thinking:  assessment, behaviour, creativity, increasing dialogue . . . It will be a very worthwhile time in terms of content, but also interesting for educators to be exposed to a different way of sharing knowledge than the usual workshop format.  Come ready to participate.  (register www.edcamp67.blogspot.ca and if it’s already Thursday try just coming!)

Aboriginal book and video gathering, the 3rd session for this year:  We will be meeting to watch a NFB film called "we were children" - a Canadian film on residential schools, at the Maggie library on Tuesday, March 4, from 3:30-5:30.  The book club connects so closely with TADL and our work in school completion.  Our book club is exposing all of us to First Nations culture and issues through literature and film.  It is giving the adults in the district a safe place to talk and learn so that we in turn can work with our students.  (register atenning@summer.com or jking@summer.com or nsearcy@summer.com)

If you are looking for professional development on innovation, creativity, inclusion, belonging, creating cultures where everyone belongs - please join us at one or both of these events.

Socials 11 is hard. It is course crammed with material and can at sometimes seem like a labyrinth. Like the famed labyrinth, there is also a minotaur waiting in the tunnel; the minotaur is of course, the government exam.

A coworker gave me an idea quite some time ago to help students study, while at the same time building classroom community and I was excited to try it out. I chose my 1920s/1930s  test, since students have typically found it to be challenging due to the breadth and depth of material contained in the unit.

Students were each given a styrofoam cup. They were told that they could bring the cup into the test as a study aid. They could write whatever they wanted on it and then, during the test, I would give them hot chocolate to put in the cup.

Some students wrote on the outside of the cup in microprint; other cut the cup up and wrote on both sides (a few who did this, also brought their own cup so as not to miss out on the hot chocolate.) Two or three students did not opt to use the cups at all.

Ultimately, the test results were higher than other years and fewer students asked for a re-test. However, anecdotally speaking, it was interesting to see that many students seldom seemed to look at their cups during the test. My ploy had worked - they had worked so hard to condense their material that they had in essence memorized it and the cup was simply there as more of a security blanket.

Interestingly, I found that in the two days prior to the test, students asked a lot more clarification questions because they had been actively reading their notes, chapter questions and reviewing. As a result, they were more knowledgeable and more prepared.

I know some teachers would scoff at the idea of a "Cheat sheet." However, if my philosophy is that I want students to learn the material, know it, synthesize it and retain it, then does it really matter how they come to that?  Would it be better to have them not do the cup, not learn the material and not do well on the test? I can think of one student in particular who hugely benefited from this form of studying and he was delighted to receive his highest mark on a test yet!

Anyhow, a neat new item to add to my repertoire and I will certainly choose to use it again for both its effectiveness and for its novelty.

Below is a video showing student examples of the cup along with a voiceover explaining what is going on.

Tell Me What You're Really Thinking… The "Ticket" Out 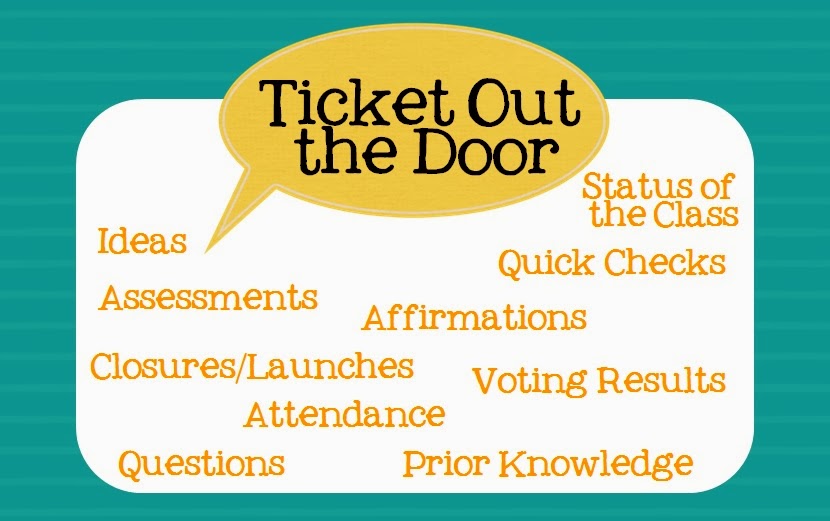 When a lesson comes to an end, and students gather up their things and head on out the door, there are days when I ask myself, Did they really get the lesson? What happened there? The hectic nature of an hour (or even two, if you are lucky to have the class for two subjects) with middle schoolers can leave any teacher with a little uncertainty as to how much the students are really engaging and really learning. One tool that I have found to be effective is the "ticket out the door". This is a quick formative assessment that can give a teacher some feedback on just about anything they want to know. One that I used recently was "Reflection on My Writing"- The questions were "What am I doing well at?" and "What do I need to work on?" This not only assessed what the students were thinking in terms of their writing, but also how they were doing with the language of writing. I wanted to know if they were able to recognize and use 6 Traits language such as conventions, transitions, style, detail, organization. Some students were able to express their strengths and next steps using the language, others said things like, "I wrote a whole page", or "I write good ending sentences". There was one student who wrote "nothing" as his strength - which clearly reflected his low engagement and therefore low confidence in writing- a good heads up for me.

In my experience, the "ticket out" is a good way to invest the last 5 minutes or so of class. It provides a reflective closure for the students, gives me some quick feedback, and provides a good starting point for the next day. Once the practice is in place, and students become comfortable with it, the "truth" really surfaces and the feedback, although not always rosy, is invaluable.