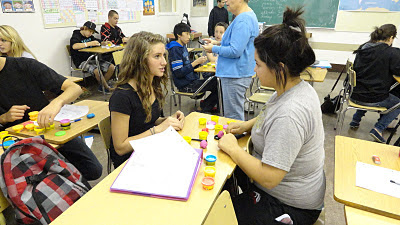 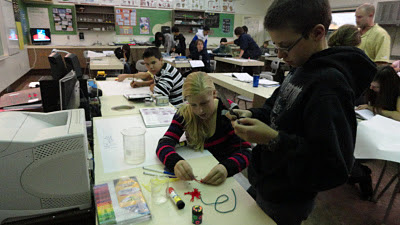 I was running around the building on Thursday returning flip cameras to members of our group. First I walked into a science 9 class (one of the focus classes) and found the students building 3D versions of Mitosis using yarn. Then I wandered directly across the hallway into a Spanish 9 class (another focus class) and found the students working on a game similar to "Pictionary" but with playdough. The Spanish 9 students had a new list of 15 vocabulary words. They worked with a partner, for 10 minutes, to create a play dough symbol for each word. (For example a lake could be a blob of blue) This encouraged them to become familiar with the new vocabulary. Then, they played a game with another pair of students. One student from each pair picked a word that they would like to "show" with playdough. They quickly created a playdough symbol and the first partner to say the word in Spanish won that round.
As I wandered through both classrooms I noticed students focusing on both the hands on activity (the playdough and working with yarn) but also constantly going back and re-checking information in their books or on their sheets. I also noticed a lot of focused student to student discussion and certainly an element of enjoyment in both classes.
Posted by Different Lens at 21:28 No comments:

This email was passed on by one of the teachers in the Maggie Group.

At one point in my life – a long time ago – it was normal to assign a zero if work was not done. But – the “assignments” section of a student’s mark was no more than 10%, and they had a week to do each assignment – with teacher help if they wanted. This worked quite well, and most students did their assignments and did well.

As years went on, I found this less effective. Students changed and so did I.

I was then introduced to an idea by Kim Schonert-Reichl, a psychologist. She called it a “2 by 10”. It has really worked for me to get those who don’t tend to do the practice they probably need. It’s an idea that is so simple and which most of us know works, but by giving it a name and consciously applying it … it helped.

Take the student who is not getting work done (or who causes disruptions, or whatever). Give him/her 2 minutes of undivided time 10 classes in a row (thus 2 by 10) and you will see a difference. I usually see it by the third day. By the 10th day, I hardly recognize the student. A former student from about 6 years ago still comments when he sees me how I changed his attitude to math (I hadn’t explained the 2 by 10 to him – I just applied it.)


Katharine Borgen
(as emailed to the B.C. Association of Math Teachers)
Posted by Different Lens at 19:30 No comments:

Posted by Different Lens at 21:12 No comments: 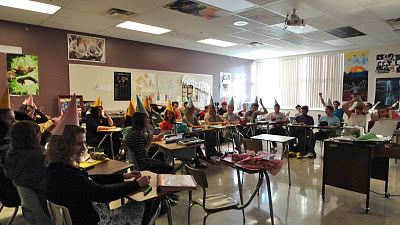 I just finished marking our first big unit test for Literature and I noticed that almost every student got 100% on a particular section. They all clearly remembered the elements of a Romance poem and were able to apply them to the poem "Sir Gawain and the Green Knight" that we study in Lit. All I did was this:

1. I put the notes for "Elements of a Medieval Romance" on the overhead.
2. I gave the students different coloured sheets of photocopy paper (they got to choose the colour-small choice but they liked it) Oh and I gave them smelly felts-they LOVE smelly felts!
3. Then I had them write down one key word from each of the notes (they had to pick the most important word). I told them not to copy down anything else because I would give them the full notes afterwards.
4. Once the kids had the words written down they had to take a piece of tape and make their sheet of paper into a wizard's hat.
5. I told them we were making the hats because the story of "Harry Potter" includes all the elements of a Medieval Romance. We went through each of the points and confirmed they were all found in "Harry Potter" books and films.
6. Kids then had to stand up and recite two elements of a Medieval Romance to a partner from memory (or by looking at the other person's hat).

So why did they remember it?

All I know is that they nailed it on the test a week later.
Posted by Different Lens at 14:18 No comments:

Fairly straightforward (the concepts aren't difficult) lesson on a Medieval Ballad. I decided to throw in a "twitter" option which worked quite well (the kids figured out how to do it-I didn't). The lesson was fairly traditional at the start, with me explaining the elements of a ballad and then we listened to "Hurricane" by Bob Dylan and identified criteria for a ballad in the song. Then we read "Bonny Barbara Allan" out loud. Then students were allowed to choose their own groups (I said max 3 but we ended up with a few groups of 4). The challenge was to capture all 11 stanzas of BBA in some form, and reference the symbolism of the rose and the thorn in the poem.

Class breakdown: 35 minutes: students in desks working independently. 40 minutes: group work with options plus the one presentation we got to at the end of class.

Option 1: Use twitter to create a fictional conversation between the two characters in the poem (that hit on every stanza)-3 groups chose this option
Option 2: Take 11 pictures of tableaus that represented each stanza.-5 groups chose this option
Option 3: Take 11 pictures of scenes created using playdough that represented each stanza.-1 group chose this option
Pros and Cons:
Pros: The students were highly engaged in the lesson and as I wandered around the school checking on groups, I did not stumble on anyone off task. It was obvious that the students were having a lot of fun. I think giving the groups a timeline (30 min) to complete their projects was also effective and seemed to be about the amount of time they needed. The activity was also highly creative. All groups had to grasp the main elements of the poem and then create a NEW way to represent the material. Inferences had to be made. But:
1. How to assess? Do I assess? From the video you can see that a number of the groups have one person "leading" (they are reading the poem itself and giving directions). Did the rest of the group members fully absorb the key elements and images in the poem?
2. Time. "Bonny Barbara Allan" is a very small piece of the course that I always easily cover in one day. Now my lesson is going to spill over into another class. Do I have this time when bigger poems need to be covered in more depth?
3. Deeper understanding. While a knowledge of the plot elements and images of this particular ballad is on the core curriculum for Lit 12, should I be spending more time on deeper issues (such as the importance of retaining culture such as folk ballads, or identifying the ballad genre in our modern lives)?
Follow Up: Monday Sept. 19th (after weekend). I did a small "quiz" (not for marks) to see if the class retained the info from Friday and retention was very high. The last question on the quiz was "did you find the activities on Friday were a good way to learn". The results were very positive:
Student #1 "Yes! It help me rember it and it was fun and better then...(didn't finish the line)" (photo tableau option)
Student #2 "Loved it, it was awesome" (photo tableau option)
Student #3 "YES, it was creative in a non-artistic way" (twitter option)
The worst comment I got (only one) was "I didn't mind it".
Posted by Different Lens at 19:11 No comments:

Students got to pick their own teams (they had worked in randomly chosen partners earlier in the lesson).

Posted by Different Lens at 18:49 No comments: