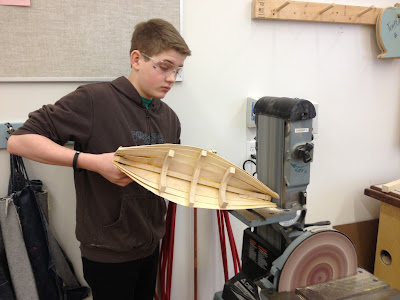 We recently completed the Vikings unit in our Social Studies 8 class.  I try hard at getting students to think about the actual work that the Vikings did in order to survive and I really want kids to get how tough it was to live back then, but also realize how much we take hard, physical work for granted.

The Vikings were great mariners because they explored other areas across the Atlantic Ocean, and they just plain spent much of their time in coastal regions.  Their ability to survive was dependent on their ability to create reliable boats that could carry men (and loot), which meant a lot of time and resources went into creating decent boats.

To get students to understand the difficulty of creating a watertight boat I had students create a scale model of the real thing.  The students were split into groups of 4 and they were given some raw materials - solid maple - to cut, shape, and assemble.  Kids got into the shop and actually cut the maple into ribs, cut the maple plies, and glued and nailed their work together in a generally authentic Viking design.  It took a total of 5 or 6 classes to complete.  We then took our boats on the last day of school before spring break and floated them on the lake and tested their weight carrying capacity and their "watertightness".  Many kids had projects that held several large rocks - weighing an amount comparable to a gallon of milk.  I was impressed and the kids had a great time.

What I liked most about this project is that students had to work co-operatively, carefully, and be focused to get these in the water by the deadline.  They learned how painstaking the process is to create a quality boat - one that in real life would carry many people to far off lands.  Everyone had a good time (and learned a lot about boat building) but the best part was watching the kids proudly watch their work sail off the dock - even the students who aren't typically successful in Social Studies. 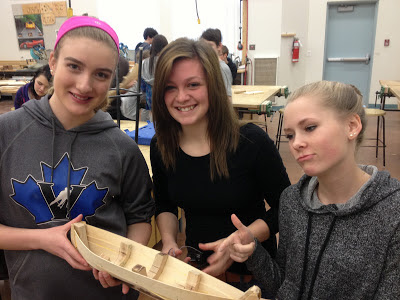 Post courtesy of Kevin Bond
Posted by Different Lens at 05:57