Recently, students from two of our secondary schools came together with other community musicians to hold an amazing concert.  This concert was a fundraiser to support the completion of a building project in an orphanage in Tanzania.  It is an orphanage that over 150 students from SD67 have worked and played in over the past years on an annual trip.

Solos, small groups, and a community choir all played a part in the evening, as well as a 75 wind ensemble. It was a real concert, with the community invited to come and enjoy.  Concerts like these, especially when they are for a purpose and are performed with other community members are important. 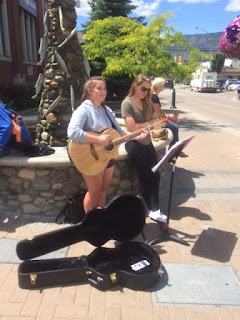 Teachers often say that we are preparing students for the real world. Dr. Grant at Princess Margaret believes in this statement. While teachers can assign grades to a student, or friends can laud a student’s achievement, Dr. Grant wanted to let the world give them feedback.  The concerts that he involves the students in are not the only way he does this.

On a sunny afternoon last spring, band students from Princess Margaret Secondary ceased to be students. They became musicians. Dr. Grant had students bring their instruments to the bustling center of Nanaimo Square in Penticton to play music as buskers. At this point, no grades or teacher input mattered. Students would find out how a real world audience would appreciate their music – and pay up in the form of tips. Students set up in several locations around a two block radius. Business people, shoppers and locals walked by. Many stopped to admire the music being played by the students, bringing joy to a perhaps otherwise busy and stressful day. At one point, a man who had been collecting bottles walked up to two students and deposited some change in their guitar case after flashing them a grin. 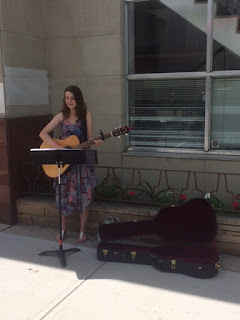 Students were nervous. They had to set up in an unfamiliar – non school setting – and place themselves at the mercy of an eclectic audience. They had to seamlessly read the crowd. Was it a younger audience who might like pop music? Were they baby boomers craving classic rock? Were they elderly listeners who might appreciate some Elvis?

Students had to exercise skills such as judicious song choice, choice of location (was it at a busy thoroughfare, was it too sunny to read the music? Was it too close to a fountain which would drown out their singing?) and consider other factors.

School and concerts in gymnasiums are incredibly controlled affairs. As his students busked in the streets, adding to the flair of downtown Penticton, Dr. Grant looked on, commenting how this type of experience is the type that is just uncomfortable enough to help his students grow, gain self-confidence and develop many skills.