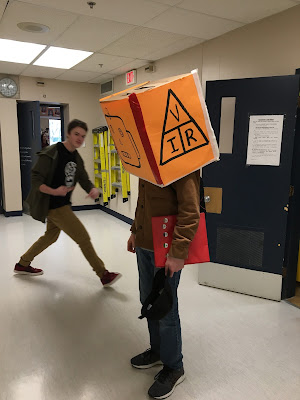 To help students understand the basics of coding in an experiential way, robotics teacher Lukas Toth designed a unique opportunity called the “Robot Helmet Challenge”. The task required students to write computer code that would “program” a fellow classmate to travel from the robotics classroom to another pre-determined location in the school.

Students wrote a series of code that was then placed on the inside of a cardboard helmet worn by one member of their group. The student wearing the helmet was not able to see where they were going so they were completely dependent on the written code. To make things more interesting, the code inside the helmet had to be written in C++ language that a robot would understand, meaning it was communicated in terms of power and time instead of body movements and distance. So for example, instead of the instructions saying “take one step forward” (human language) the code would read “motor one and motor two (both legs) full power for one second" (walking for one second). A key purpose of making sure the person wearing the helmet couldn’t see where they were going was also to help students grasp the concept that a robot is only able to do what it is programmed to do. A robot cannot “see” beyond the code that is written for it.

The helmet challenge turned out to be a fun, experiential, and visual way to help students learn the concept of coding that was much more engaging than practicing on worksheets. After the students had finished programming their friends to reach the desired location, they took the same code and loaded it into their actual robots and then adjusted the code as needed based on what happened.

The results of the challenge were that the students were engaged and participated fully in the learning opportunity. Even though the task itself was simple in its design, it required complex problem solving skills as well as the use of the core competencies of creative and critical thinking and communication.

Some insights Lukas gained from the experience were that he will definitely do it again (this is his first time teaching robotics), and in retrospect he realized that having a challenge such as this one early in the semester really helped to set the tone for the way the course was going to run. Students realized they would have a lot of freedom and choice in the way they solved the challenges they would be given, and that collectively they could impact the direction of the course through class reflections and conversations. In Lukas's words, the robot helmet challenge really "opened up the culture of the classroom".  In their book "Empower", John Spencer and A.J. Juliani emphasize the importance of creating an environment where students take true ownership and control  of their learning, and the positive way that students are describing their experiences in robotics class supports this.

A final and unanticipated benefit of the robot helmet challenge was the engagement of students and teachers outside of the robotics class. Adults and kids alike were intrigued by the students in their colourful cardboard helmets and their various (often frustrating and humourous-see photo below) attempts to reach their destinations.  It created an atmosphere of fun but focused collaboration and problem solving, and it certainly created some positive publicity for a new program in the school. 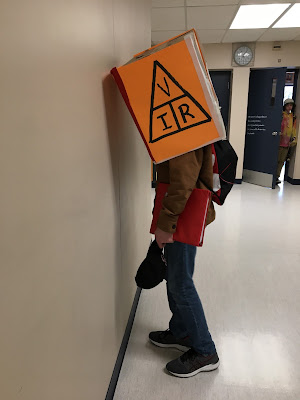 This is the first post on the TADL blog from SD53 (Okanagan Similkameen).
Posted by Different Lens at 15:15