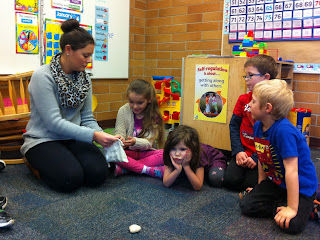 Kelsey Allison has been exploring provocations with her kindergarten students.  She was excited to be included in an inquiry group in SD53 facilitated by Melia Dirk.  The group included primary teachers who were attempting to change traditional centres into more inquiry based provocations where students would have the opportunity to follow their wonders and curiosity. 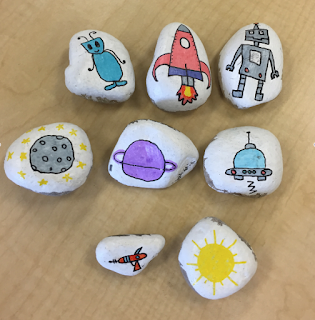 One of the provocations was ‘story stones’.  Story stones are stones that have images painted or glued onto them.  Kelsey started with stones that had outerspace images – aliens, space ships, laser beams, etc.  Before using the story stones, the students learned about beginning, middle, ending, setting, and characters; they read a lot of stories, and also talked about how not all stories have the same structures, and how each story is unique.

The first time Kelsey used the stones the class did it as a whole group.  The stones were placed in a bag so that the students could not see the image they selected.  Initially, Kelsey began the story giving a detailed description of the stone she chose whether it was a character or a setting. She explains, “I found by modeling the detailed language and sometimes even having the kids close their eyes and imagining the description – it encouraged the kids to become more specific with their language and communication."

After modeling the beginning of the story, the students would continue around the circle.  Each student selected a stone and added to the story.  The rest of the students knew they were not to interrupt – that the student with the stone was the only child to speak (the students were familiar with using a talking stick at circle time).  As the story went on, the kids were encouraged to make reference or connections to previous characters or events in the story.  The final student was to create the ending. Initially, many of the stories were not very coherent, however, they improved a great deal the more they practiced.

All through the year Kelsey used the stones in a variety of ways:
• she sometimes modeled a story using the stones to tell a complete story
• as whole group activity which would carry over into journal writing where students would draw or write about their favourite scene or an extension of the story.
• at a centre or provocation where students were frequently drawn to using them to make up their own stories, individually or with a small group. 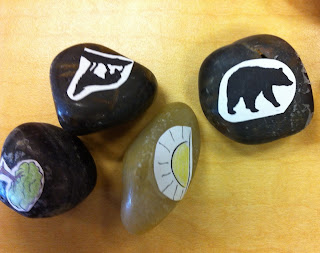 Kelsey has a number of different story stone sets.  Because of her strong interest in weaving indigenous pedagogy into teaching, her personal favourites are the stones the class created of local plants and animals.  “As a class we decided we wanted to do this after reading the book Kou-Skelowh - We are the People: A Trilogy of Okanagan Legends.  The kids decided to carry on with the local place based theme and create stones of local plants and animals.  What was really cool was that the kids wanted to take the stones outside and tell the stories in nature”.

Kelsey is a kindergarten teacher in SD67