Engaged in Learning in June

Steve LaPointe teaches grade 4/5 and believes that May and June are the perfect months for kids to do some intense, engaging learning.  “All the scaffolds are in place.  The kids can self regulate, the parents are involved and supportive, there is a feeling of respect among the kids.  It’s important to keep kids thinking about learning during this time of year rather than thinking about the year ending.”  So one of the things  Steve involves the students in is “Genius Hour”.  He first got excited about Genius Hour working with David Hird at KVR Middle school.   He found that it was tremendously engaging and motivating, and so he has continued with his students in grades four and five. 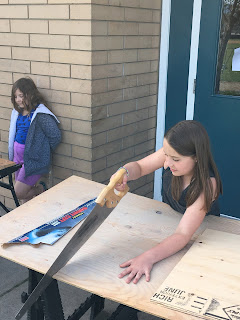 Steve has the kids think of something they would love to pursue… using imagination and personal passions and interests.  He tells them about how Google operates – a company that give company time to its employees to explore their passions that are good for human kind.  “What would you explore if you could?”  “What is your personal interest?”  “What would you say to me if you had the chance to say ‘How come we never get to learn about ____ at school?’”  “What do you want to learn about, or learn to do?” 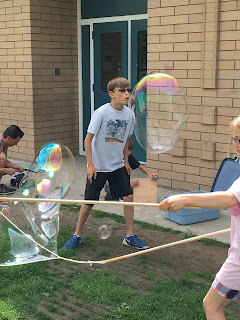 As part of the 6 weeks project (twice a week beginning in early May), the students write a question “How can I build a skateboard ramp”, “How big of a bubble can I make?”  “What kind of cat house might my cat like?”  “How can I build a car that runs on CO2?”  They research the project, spend time talking with their parents and peers to flesh it out, explore the internet for designs and ideas, and then write up a proposal that indicates their question and the materials or resources they need.  This proposal has to be approved by both the teacher and the parents.

Then the action begins.  The students start gathering information on a topic, or begin their creation. The classroom, hallway, and workspace outside the classroom door becomes a buzz of activity as students are gluing, hammering, and creating.  Though each project is individual you see students helping each other out with their projects, and displaying what they have learned about ‘coaching’ each other.  Engagement is high as all the kids appear to be highly self-motivated.  Steve reports that there are few behavior issues because they are all doing something they love (“sometimes they are just too excited”).

When the projects are completed, each student does something to report out – a power point, poster, picture display, a movie, or a short write up.


Teacher reflections:  Steve values Genius Hour.  He loves to watch the kids totally engrossed in their projects, excited to learn and share their learning, displaying such respect and cooperation with each other.  “They are at peace with themselves and each other”.  It is a fabulous way to end the year.”  Steve noted that one of the challenges for him is not rescuing the kids… “it is hard sometimes to let go or not step in.  I am repeatedly saying ‘If you get stuck come and see me’ but then staying hands off unless I’m invited in.”  The kids disappointments are also key – “their plans don’t always go the way they think they should but they learn a lot from that, and I am there to support.”  All in it is “just so worth it.  You just have to watch them to know that”. 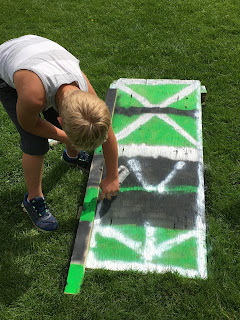 Comments from the kids:
“I learned that it is not always easy… there are always difficulties.  For example, you have to be careful with the length of screws you use cause some of them went right through the boards”

“What I loved is that you get to build something that inspires you – and might inspire you to do something in the future”.

“I liked working on something that I want to learn.  I got to explore ways that work and ways that don’t work.  It was all about something we wanted to learn.”

“It was really FUN for the kids”

If you want more information contact Steve at slapointe@summer.com