Last  year, teachers in the different lens project followed and completed case studies for 37 students at the secondary level.  While of course all students are different and not every strategy applies to every situation, here are 3 successful strategies that appeared over and over again throughout the teacher reflections. 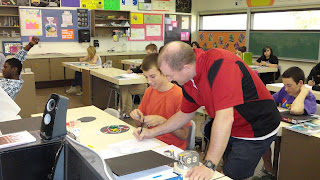 1.  Establishing Positive Relationships:  Establishing a positive relationship with the student was reported to be the most important strategy in working with students at risk socially or academically.  Teachers did this in multiple ways:  meeting and greeting the student, attending sporting events that the student was participating in, and making personal connections by talking about the student's interest. Teachers also tried sending students reminders through texting, facebook, or phone calls, advocating for them in meetings where the student could hear the teacher talk about them in positive ways and offer support, building trust with them, encouraging them to attend, and encouraging them to try something a different way, building a team of teachers around the student so the student knew there were a number of them supporting him/her, showing tolerance for unusual behaviour, and following up on issues and concerns.

• I always used him as an example in analogies – it gave him the attention he needed.  (gr. 9)
•I advocated a lot for her – I sat in on admin meetings, counselor meetings etc., made a tremendous amount of accommodation in partnership with the alternate teacher.  (gr. 11)
•I made a point of talking to him each day he was in class at the start.  Nothing even school related… we started to develop a good relationship that helped in the classroom. (gr. 12)
•I had informal interactions in the hallway and before/after class.  I felt he liked/respected me – he brought me a novel of his own because he thought I would enjoy it.  (gr. 10)
•The more I talked with him, the better his behaviour became. (gr. 9)
•For one month we had success as she linked to a short term peer tutor that had a link to her socially in the community. (gr 11)
•After he returned to class with his leg injury, I made a point of asking him about his leg, his rehab, physio etc. every day I saw him.  I think that connection was huge in our relationship development.  He became much more pleasant, and more focused on getting his work completed and handed in. (gr 12)
•I made an effort to check in with her to find out how she was doing.  I made sure she was aware of timelines, schedules and important due dates.  I strongly believe that the simple conversations about her daughter increased the relationship between her and I.  We realized that our children were in the same daycare facility which opened up dialogue between us.  (gr 12) 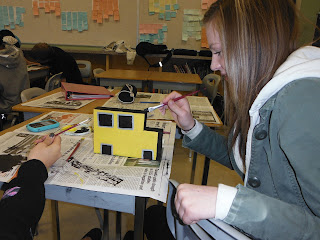 2.  Giving Choice and Creative Options that build on student strengths / interests and passions:

Many teachers reported that part of the success with their students was due to either teaching in different ways, or allowing students to respond in a variety of ways.  Teachers gave choice on assignments and students responded by making films, building projects, or using music or art or verbal skills to show their knowledge.  Students appreciated choice in assessments, projects and being able to link curriculum with their passions such as skateboarding, music, or hockey.

• When we did the first project he chose to work on a project on his own.  He handed it in on time and it was totally complete.  When we did a cartoon where I gave them the pictures and he had to write a story, he did not complete it.  When he was told to do the same type of assignment again where they could find their own pictures and had less guidelines he did it on time and it was complete.  For the final project he chose to write a visual dictionary style assignment.  He handed it in on the day it was due and presented to the class what he had done.  The choice of assignment and freedom to do what he wanted seemed to make all the difference.  (gr. 10)
• He loves poetry – he wrote a poem to present 10-12 facts about the unit we were studying.  It was unique and well received by the class. (gr. 10)
• Giving choices was definitely a great option for him.  We were creating magazine covers in the computer lab for a unit and the students were to pick any theme they wanted, and focus on what they were interested in.   He of course chose a skateboarding theme for his cover.  He was focused, actively participating, not looking for answers from other students and actually producing great work!  He finished the project on time, handed it in and was genuinely proud of his work!  (gr 12)
• He responded well to challenges that he was given. He also appreciated choice in the class and the ability to use music to show his understanding. Overall I think the class just really worked well with his abilities.  (gr. 12) 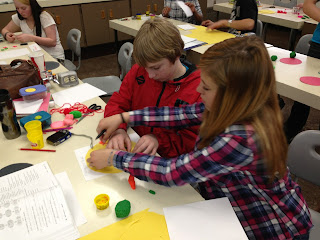 3.  Partnering thoughtfully:  Teachers consciously worked with groups in their classroom to support those students who had more difficulty working with others or students who needed someone to explain tasks or read material.

• It was always important to place him with the right partner(s) to keep him focused.  An odd combo is the friendship he formed with a straight A perfectionist student. (gr. 10)
• The initial partnering of a pre-determined student really worked well. The other student was very good with him, and it took the pressure off me to integrate him into regular activities right away. Once he got more accustomed to the other people in the class and the general pace of things, I believe it was much easier to get him to work with others than it would have been if I had just randomly thrown him in with different partners. By the end of the course he would work with everyone. It is always my goal by the last month to be able to randomly draw names from a hat and have the students comfortably participate with any group members and I was able to do this with no fear about his group members. (gr 12)
Posted by Different Lens at 20:26