Some Different Ideas for the Pythagorean Theorem

We have been learning about the pythagorean theorem and the area of the squares of the sides of a right triangle.  I found a cool little jigsaw puzzle that shows the idea.  I have been giving the students 5-10 minutes at the beginning of each class throughout the unit to try and figure it out.  It is quite interesting, one student figured it out within the first class.  But none of the other students have figured it out yet.  I have math first block, so it is a great way to get the students to wake up and get them interested.  They are all into it and it really bugs them that they can't figure it out.  I have a few students that are working on it at home, but still haven't got it. 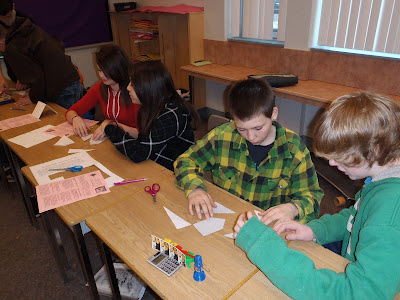 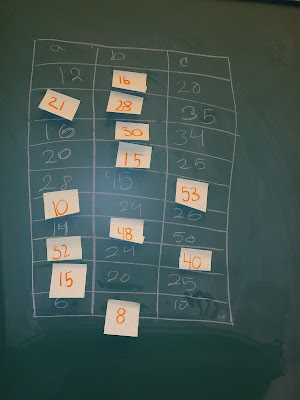 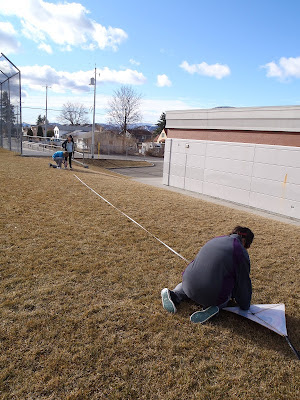 Next was practicing Pythagorean Triples.  Rather than just giving them a bunch to try out on a sheet of paper, we did a little sticky note activity.  I created 10 or so triples, then put them in a chart.  I took out 1 or 2 numbers from each triplet.  I then put the class in groups and gave them each a section of the board and some sticky notes.  I then gave them the missing numbers and got them to write each number on a sticky note.  I then got them to write the chart, with the blanks, on the board.  Once every group was at this point, I made it a race, and had them complete each triplet.  It was just another way for them to practice using the pytahgorean theorem with a little bit more excitement

I have now started a little activity outside to show the practical use of The Pythagorean Theorem.  We are having a kite flying competition, where they need to determine the height of the kite using the Pythagorean Theorem.  The first class I told them we were going to have this competition, but before we go out to actually fly kites, they need to be able to tell me how they are going to actually determine the height.  So they discussed with their group and came up with their method.  The next class we continued our discussion and then came up with the most accurate way to do it.  We went out and started the activity today, and will continute tommorow.  Apparently I need to give a little lesson on kite flying as well.  However, we will get the idea across and have some fun with it. We have cheap little dollar store kites, as well as nice big kites.  Pictures and videos of this activity will come once we have it completed.

My last little activity will be for the students to go outside and determine the lengths of specfic items outside.  I made up a little worksheet where they go outside and take the measurements of certain sides of specific items and then use pythagorean theorem to find the last side.  Rather than doing the textbook applications, we use actual applications.

A fun unit, really easy to use real-life applications!  Post Courtesy of Pam Rutten
Posted by Different Lens at 12:22