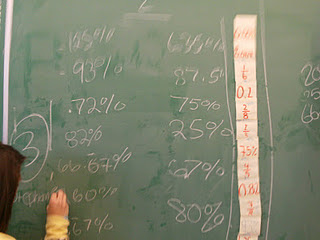 This post is courtesy of Middle School teacher Pam Rutten.

Monday morning always seems to be a struggle for my students to get motivated, especially in math. So I am really focusing on Monday mornings and how I can get them engaged right off the bat. This Monday I tried a little activity with Sticky Notes. We are working with fractions, decimals and percents. I wanted them to be able to convert a fraction into a decimal, or a decimal into a fraction, etc. and understand what the values actually meant. I split the class into 6 groups of 4 and gave each group sticky notes. I then wrote 14 different values in the board (.0067, 75%, 3/5, etc) and had them write one value on one sticky note. I then gave each group a section of blackboard and their task was to place their values in ascending order on the board. I made it a competition to see who could complete the task first. Those were the only instructions I gave them. In order for them to do this, they first had to recognize that it would be easiest to convert them all to the same type (either all fractions, all decimals, or all percents), and then order. So it was very interesting to watch. All the students were very engaged and discussing with their group about how to go about the task. A few of the groups converted all to percent and a few converted all to decimals and then ordered them. Once they thought they had it correct they would call me over and I would simply say "error" if there was one and they would all go crazy and try again. Once they had all figured it out I had each group pick a representative to share the approach their group took to solve the problem. Then to top it off, no group had converted to fractions, so I had another race to see which group could now convert all the values to fractions first. Overall, I would say it was very successful, and the students had a much clearer understanding than they did at the beginning of the class.
Posted by Different Lens at 21:59