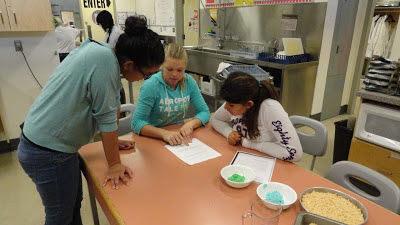 I had thought about doing a foods lab before, but it never came to fruition until this year.  We decided to make Rice Krispies squares because it is a simple recipe and the cost of the ingredients were not too expensive.  The icing was made before class (two different colours to represent positive and negative rational numbers) the butter was pre-cut into tablespoon blocks. 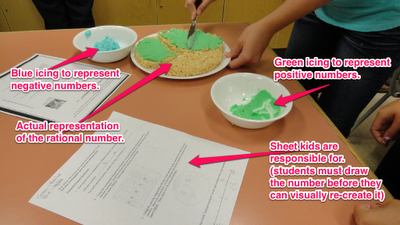 Students were placed in groups of 4 in order to participate in the lab.  Each group was responsible for representing one positive and one negative rational number.  Teams were given one square 9”x9” pan and one similar sized circular pan to use to represent each of the groups’ assigned rational numbers.

Basically there are 5 components to this lab:  1. Paper Assignment   2.  Making the Rice Krispies and dividing the product evenly into one square pan and one circular pan 3. Dividing each pan into the appropriate parts to represent the two different rational numbers.  4.  Each group then placed the two rational number representations on the large class number line in the appropriate location.  5.  The exercise concluded with a class discussion and review of the final number line.

I asked the students to reflect on, and provide feedback about the lab during the following math class.  Here are some of their thoughts/feedback they provided:

“I liked it because it showed how it (rational numbers) relates to real life”.

“I liked the foods lab because it was a learning hands-on activity.  It was cool to see the big number line and where all the Rice Krispies squares fit on it.  It was a nice break from the textbook, and it was helpful to visualize”.

“It was yummy and fun! It was a good way to work with other students”.

“It is fun to learn in different ways instead of from a textbook.  It’s a really nice break and I wish we did them more often.  I actually did learn from placing them on the number line.  It was a really good idea!”

“I think having a foods lab is a wonderful idea for us to get a delicious hands-on math lesson!  Two thumbs up!”

My conclusions: The food lab was a worthwhile departure from a regular lesson because it engaged students in learning about rational numbers in a dynamic and meaningful way. The exercise fostered communication within groups and between groups resulting in as deeper understanding of the concepts. Since most (if not all) of the students enjoyed the lesson I would definitely try the food lab again.

Post courtesy of M. Berrisford
Posted by Different Lens at 05:40