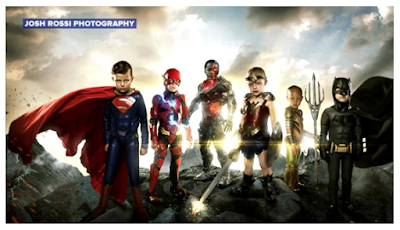 The photographer Josh Rossi is known for his incredible use of transformative imagination. He has photographed young children who are sick or who have physical disabilities and transformed them into superheroes. His belief is that you can take your weaknesses, or your perceived weaknesses, and turn them into strengths. The children he began working with did not know that because having their legs amputated, rare cancers, or eye disease did not feel like strengths to them or their parents, yet they began to see themselves differently through the eyes of Josh Rossi and his camera.

Watch this youtube video of what Josh Rossi believes is possible.  There are other youtube videos of his work in this area.  He is motivated to transform how kids can see themselves.

As educators we have the same opportunity.  We work with all sorts of children who see themselves as 'less than', 'not good enough', etc.  What could happen if we too used Transformative Imagination and helped them to see themselves through our eyes as capable and strong human beings who have a vast amount of potential and all sorts of super powers?

In Through a Different Lens all of the educators in the project look at their own practice through the eyes of a student or two who we call 'wonder students' - students we spend a lot of time wondering about.  How can we support them? Engage or empower them?  Build a relationship with them?  One way to support children is to use our Imaginative Powers to see them differently, and to see their ‘perceived weaknesses’ as a strength or as an opportunity for finding strength, and then help them see this as well.

When we help our ‘wonder students’ see themselves as having all sorts of special powers and abilities,  they change their view of themselves.

If we use Transformative Imagination with our students … what might they become?
Posted by Different Lens at 17:29