The Power of a Problem

Some companies have moved away from looking at resumes or post-secondary grades and moved towards giving applicants a problem to solve. In this way, they very quickly get to know what there prospective employees can do. Are the applicants creative problem solvers? Are they good at teamwork? Do they possess the necessary skills to thrive in the work environment?


In Socials 10, Christy Bevington decided to give students a problem. Their task was to show their understanding about the Upper and Lower Canada Rebellions. Now the catch: students were not allowed to use writing.  The teacher brought in a box full of supplies which included glue, coloured paper, pipe cleaners, Dixie cups and a variety of other craft materials. Students had one day to create a diorama or another representation.   The following day they had to present it to the class.

Their presentation had to explain in depth how the craft captured significant events, items, characters and landmarks in the rebellions.  Students spoke with authority, used metaphors and had a great deal of fun as they used the materials to illustrate what they had learned during the unit. 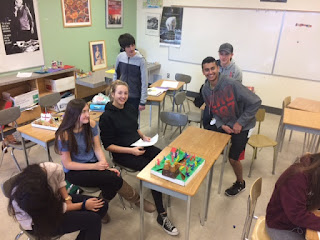 Their understanding of the history was noteworthy as they explained the slightest details they had incorporated into their work. From the colours of the pipe-cleaners, to the direction of travel of the characters, to the width of the river and locations of the houses.
Teacher comments included:
- The biggest factor that led to rebellion in upper Canada was land, so students showed that land was taken by the clergy and the crown. Often they used the symbol of a crown or a cross. In Lower Canada, the fact that the British controlled the French majority was an issue. Students showed this with many blue pipe cleaners being lorded over by red pipe cleaners.
- The boat represented the concept of the journey of immigrants. It was long and dangerous, but led them to the promised lands.
- One student used a castle to represent the iron rule of Britain and it had a moat and drawbridge which the student explained were obstacles to the French Canadians who wanted to metaphorically storm the castle and rule themselves through representative self-government.

Students explained that by having to create visuals and explain them, they came to a deeper understanding.
Posted by Different Lens at 11:32