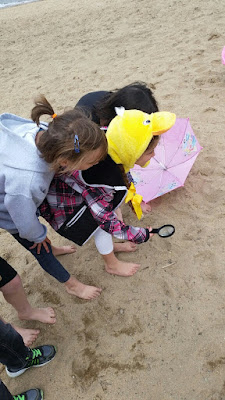 Last May, I had the opportunity to observe two outdoor kindergarten classes in Nanaimo. I was seeking a new way to engage my students and wanted to “get out” of the classroom. When this opportunity arose, I jumped at the chance to experience this place-based learning style and was pleased that I did.

I felt that my class was having a hard time engaging with their learning. I felt that I was not teaching the way I wanted and that my class was in need of something different. So I started Outdoor Explorations. I saw a difference immediately! My students could not wait to go outside and write in their nature journals and learn about their environment.  I saw a big difference in my students who were more reluctant writers and ones who didn’t engage easily.  Outside I found they became very curious and had no trouble drawing and labelling in their journals.

I was extremely lucky to have an Aboriginal Support Worker participate with us. She was able to provide an Aboriginal Perspective, which added a deeper connection with the environment.

I did a number of things to make our Outdoor Explorations successful.  The students REALLY wanted to learn outside, so I told them that they could as long as it was always safe, and to be safe it meant that we had to be able to do a number of things.

1.  Follow the three class expectations:  Respect Yourself, Respect Others, and Respect the Environment.  We discussed what each one of those meant and we talked about examples.  Respect Yourself meant that you were not going to do unsafe things – like hang from a tree or jump near a cliff; Respecting Others meant that we would do everything we could to keep everyone in our classroom community safe – for example we would look out for each other, we would not be pushing or shoving each other; and Respecting the Environment meant that we would not be damaging the environment, breaking plants, and taking things out of their environment.

2.  Listen for the whistle:  I taught them that if I blew my whistle at any point while outside, they would stop immediately and come back and gather together.  I assured them that if they could do that out on the school grounds then it would show me that they could respect themselves, and each other and keep us all safe.

After I felt confident that the students would come when I called; we went on our first excursion.  I always took a whistle, cell phone, an extra adult (CEA, parent, principal, or another teacher) and was sure to have parent permission (field trip forms).  The children all needed to have a clipboard and pencil. 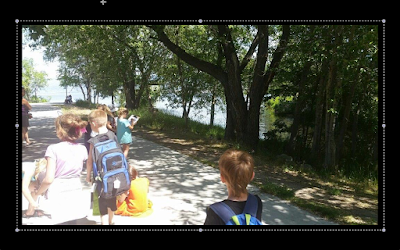 When we went off the school grounds, I set boundaries for the kids.  I would have 2 kids run to the edge of the boundary.  I would tell them they could go anywhere within these boundaries but if I blew my whistle they must come back immediately. I practiced this at every new site.

I always reviewed our 3 class expectations before going out on an excursion, during the excursion, and at the end.  The kids understood that safety is very important and that if they could act safely, we could be learning outside.

The kids ALWAYS want to go outside. They want to learn. They are inquisitive.  They have no difficulty at all distinguishing between running around at recess and learning time outside.  In fact, instead of thinking that learning time is recess, the opposite happens.  They come in from recess telling me about things they have observed, or sometimes problems they have encountered with students not respecting the environment.

During one of Outdoor Explorations, my students became fascinated with a spider web. They took great care not to disturb it. As they were examining it, a person walked by and asked what they doing. My students took the time to explain how a spider web was created and the importance of leaving it alone. They also informed the “stranger” how important it is to preserve and take care of nature. At this point, I was extremely proud of my students and knew that I made the right decision to bring Outdoor Explorations into my curriculum.

By Kelly Maxwell
Grade 2/3
Posted by Different Lens at 11:08