Learning Outside the School

This fall I had a contract at KVR Middle School teaching grade 6, 7 and 8. I have a passion for service learning, community based learning, and letting students experience learning beyond the four walls of the classroom.  So during my time at KVR I focused on building empathy through having my students make connections to their school and greater community.

I started by having the students brainstorm problems within their school, city, and global communities, which they felt passionate about. The class narrowed down their ideas and came up with three ways to help their communities: garbage pickup around the school, collecting new and gently used warm clothing and toys, and going to a senior centre to keep them company.

Garbage pickup:
The grade 7 class organized themselves, went outside and picked up all of the garbage on the school grounds. The students had a blast and in just under an hour they collected 12 full bags of garbage. This might have seemed like a one time thing, separate from their day-to-day lives to the students, but it did make a lasting impact on some of the students. Some were clearly more aware of the garbage that surrounded them, upset at how quickly the grounds were once again covered in garbage. This helped them take ownership of their school grounds, and feel their connection the space that they spend so much of their time in.

I knew the students had started to feel empathy for each other when they were walking to a local elementary school to deliver the clothing and toys and one of the boxes’ bottom broke.  Scarfs, mittens and tuques flew everywhere. Almost everyone in the class stopped to help them pick up the articles and carry them the rest of the way.  The students were so proud as they recognized how they could directly effect lives around them in a positive way. 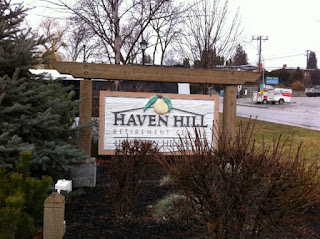 Senior Centre:
The grade 7 class chose to go to Haven Hill and bring holiday cheer and baked goods to the residents.  The students shared the goodies and helped the seniors make Christmas cards for their families.  One student played  the violin and a few others took turns on the piano, playing Christmas carols while the rest of the group sang along. Talking with the residents was eye opening for many of the students; they enjoyed learning from them and hearing some old stories.

These actions were powerful for the students because they choose and organized them.  The students found things they wanted to do to positively impact the communities around them. It helped them see how much they can achieve on their own and the power they have to make change in the world around them.

Submitted by Alannah Stewart, a recent graduate from UBCO and first year teacher in SD67