Outdoor Adventures and "Doodling" in Science


We're into another science unit, this one is simple machines.  Again, being years since I've taught science, I didn't want to do the same old, even if it did involve more hands on than other topics.  Our first task was to explain force, with reference to friction, slope and load.  We spoke briefly, putting the terms on the board and telling the kids we would be having a lesson outside.  Afterwards, they would be using the given terms to label a 'doodle' illustrating the lesson.

We took the kids to the sliding hill with a sled and a mat.  With students making predictions and observations along the way, we had one child, then two, slide from a marked point where another teacher and I held them back.  This also gave us an opportunity to introduce potential and kinetic energy.  We repeated this with the slide, the smooth side of the mat and the woven side of the mat.  They could easily predict what would happen so they were just getting the science behind what they already knew. Below is an example of a student illustration of the outdoor experience. 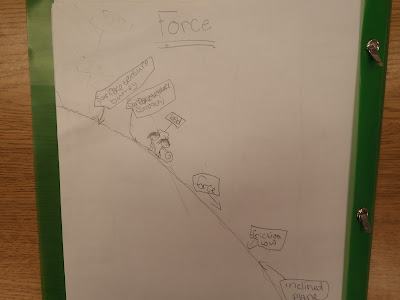 Post Courtesy of Judy Schneider
Posted by Different Lens at 19:48