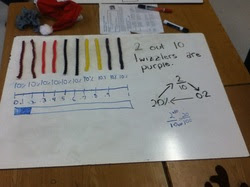 Often fractions to decimals to percents can be one of those topics that students who struggle with poor number sense find challenging.  Because of this, I often resort to teacher-led instruction on this unit.  I was finding that my traditional mode of delivery for this unit is mainly lecture, board examples, and worksheets.  As much as you can try to make the worksheet questions entertaining and fun, I thought that I would tackle this concept by a hands-on activity this year.  Their mission: to visually show using any objects they wanted, a fraction, and then show how they convert to a decimal and a percent.  They then had to take a photo of it and submit the photo as the mark.  The idea came from the "Twizzlers" math picture book where they show licorice in fractions, the conversion to decimals, and then percents.

This project let me to some very interesting observations.  My stronger students in class were very creative in their representation of the fractions/decimals/percents, but some of them ran into issues as they were trying to get too fancy.  Some of the students that I would say had a weaker number sense took on a great leadership role in this activity.  Their pictures were clear and concise, and often were easier to follow.

Another bit of a risk that I took with this activity, is that in other photo-based activities in either Math or Science I have been using the school cameras.  This time I allowed the students to bring in their own camera and they needed to email them to me once they were done.  The excitment was huge that they were allowed to use their own devices.  And the maturity around using the devices was also impressive.  The students were working in groups of 4 for this activity.  Again, I was very pleased to see that in many of the groups, the leader of the group was not who I would have anticipated.  Leadership and confidence came out of the woodwork on this one.  And lots and lots of having fun!  Since we were using the larger white boards as the background, the students could still show their work and their thinking behind their conversions, which is important.  And with each group very much engaged, it was easy for me to get around to each group and make sure that their thinking was correct and on the right track.  It was a fun couple of days and I was impressed with the learning and practice of the topic.

Post courtesy of Shona Becker
Posted by Different Lens at 21:29